Padel is a sport that has a short but very intense life. Since its creation, it has not stopped growing at an amazing rate, and it is currently one of the most practiced sports in many countries, and in particular, in Spain and throughout the rest of Europe in constant evolution. 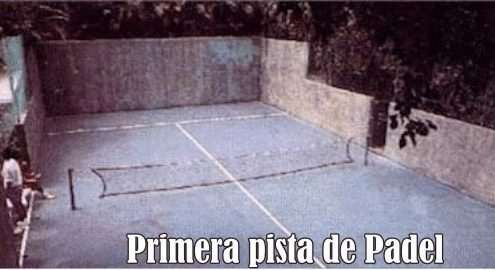 Padel, or Paddle Concuera, as it was known in its beginnings, has been created in a very practical way. The official date of birth of Padel is 1962 in the residence of Enrique Corcuera in Puerto Acapulco (Mexico). The Mexican had a ball wall game and suddenly decided to install a central net and close it completely with a low wall. See image.

At first this was done for making it more comfortable. In spite of the low wall, the ball was often played on the neighbor’s property, which significantly slowed down the game and made it difficult. As an improvement he decide then to increase the walls, so that the ball was played against the wall and so could be played with much less interruptions, which was particularly fun.

In 1974, his friend Prince Alfonso zu Hohenlohe from Spain was inspired by the enthusiasm of Enrique Corcuera for the new game. In the same year, the Padel was introduced in Spain by Alfonso, who built two places in his hotel Marbella Club. He not only brought it to Spain, but continued to work on details of the rules and the playing field.

At the launch, the first official and recognized “Pro-Am” tournaments were organized. These were sponsored by the brand “Smith & Smith”. This tournament had the special incentive that the participating couples had to be formed by a professional player and a famous person, which greatly promoted growth and popularity in Spain and South America. That’s when the perfect venue for the media emerged.

Personalities such as Enrique Iglésias, Patxi Andion, the Duke of Borbón, Manuel Santana, Guinlla of Bismark or Esparto Santoni and other personalities began playing Padel at the time and this sport was becoming massively popular.

Padel spread in South and Central America with varying degrees of success and also reached the US and Canada. Padel has developed the most in Spain, Argentina and Brazil.

When an ambitious sports club or sports facility goes for a padel concept, the question often arises of how many padel courts fit in the hall (indoor) or on a certain area (outdoor). To make […]

Why does Padel make it so fun?

FUN COMPONENT Padel convinces by its simplicity and its very high fun factor. The rules of the game are quickly explained and the basic techniques of the individual strokes can be learned quickly without time-consuming […]

This year 2018 we will together reach a new and important goal, to celebrate the 1st FIP World Seniors Championships 2018 by National Teams & National Couples. The municipality of Estepona, Malaga, Spain, will host this 1st […]

Combining structural strength and high design features is an integral part of our value proposition. From a structural standpoint, and especially on Outdoor installations, using glass requires FIRST a good and safe steel structure to secure […]

Sports and padel facilities were largely closed in March 2020 due to the outbreak of the coronavirus (Covid-19) and as per government instructions. From the End of April / beginning of May 2020 in some […]

There are a good number of factors that are directly related to the price and we would like to introduce this to you in more detail:  PADEL COURT MODELThe application (indoor or outdoor) actually decides […]

Your first marketing steps …..  Here you will be able to download flyers and posters as an editable file, so you only have to add your logo and make your possible adjustments, translations and additions. You are fully flexible and completely free to modify the graphics […]

PADEL highly attracts ladies too. The success factors such as: fun, simplicity, social and physically not very demanding, play a very important role here. These are the little secrets that have made Padel in one of […]